I made another custom 10" Teddy Trooper for our show at the TOYKIO gallery. Like mostly everybody else my age grew up with the Star Wars movies and maybe more important: the Star Wars Kenner toys. I had been thinking for a long while which of the classic SW characters i could pick. Some of them are obviously fitting on the teddy and helmet.... Darth Vader, Stormtroopers, Boba Fett, Biker Scout, Deth Star Gunner.... etc. Most of them have been remixed a hundred times. Somehow at the end i came up with the lamest and uncoolest character of the whole universe: Admiral Ackbar. And the Kenner's Ackbar toy figure even came with the most useless weapon of all time. A stick. "Hey! Look at my new stormtrooper figures i just got! Those big blaster they have! They can shoot down everything. What have you got?" - "Admiral Ackbar! He can destroy the Death Star! With this... äh,... stick... thing." (To not offend Ackbar's dignity any further i haven't given him a stick... thing.)
Available at the TOYKIO Shop&Gallery. 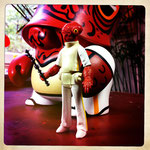 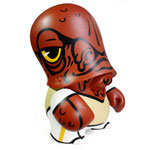 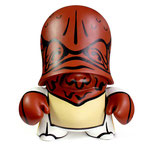 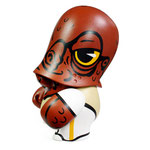 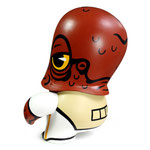 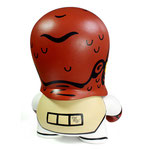